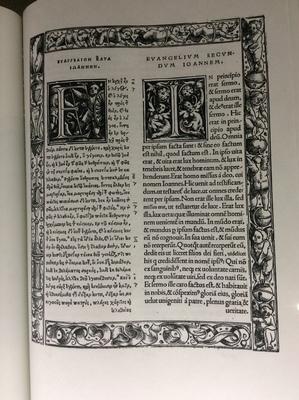 The major contribution of Erasmus to the advancement of the Reformation was his publication in 1516 of a Greek-Latin parallel New Testament which became foundational to much of the translation work of the reformers. His translation and correction of the Latin Vulgate from the Greek was much more accurate and reliable than the version used by the Roman Church. This work of Erasmus focused attention on just how inaccurate the Latin Vulgate Bible had become and how important it was to go back to the original Greek so that the translations of the Scriptures in the languages of the common man could be accurately and faithfully completed. The subsequent versions of Erasmus' Greek New Testament became known as the Textus Receptus.

This copy of the Erasmus Greek-Latin New Testament is a photographic reproduction of the second edition printed in 1519. It contains Erasmus’ translation of both the Greek and the Latin Vulgate texts in two parallel columns. This edition was used by Tyndale for the translation of the first English New Testament in 1526. It was subsequently used by the translators of the Geneva Bible, first printed in 1560, and the King James Version of the Bible, first printed in 1611.