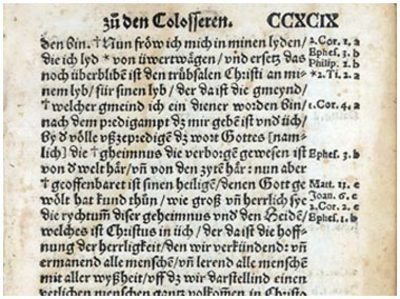 Martin Luther said: "Here I stand. I can do no other....my conscience is captive to the Word of God."Luther knew, as a reformer, that he could not affect future generations without a common language Bible. So he began his German translation of the Bible and first published the New Testament in 1522. Luther completed the Pentateuch in 1523, and another edition of the New Testament in 1529. In the 1530s he would complete the printing of the entire Bible in German. Luther's work was an inspiration to William Tyndale, who desired to translate the Scriptures into English, which was illegal in England. So Tyndale showed up on Luther's doorstep and completed the first English translation of the New Testament in 1525. In his translation work, Tyndale, who was fluent in 8 languages, compared his work against that of Luther as well as a number of Greek and Latin texts.

A complete printing of Luther's 1529 German New Testament has never been found. The fragment from which this leaf is taken is the only one known to exist. The first complete German Bible was printed in 1530. The text on the two pages is from Colossians chapters 1 and 2.