One Nation Under God: The Bible in Early America 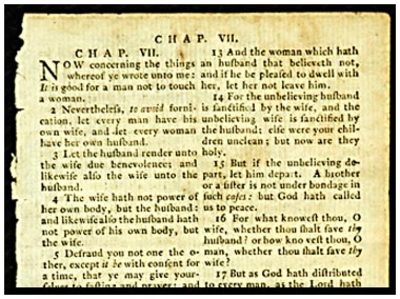 The first complete English Bible printed in America was published in 1782 by Robert Aitken. Up until the American Revolution, all Bibles in English had been imported to the Colonies from England. But during the Revolution, Bibles were not available because of the embargo on English imported goods. The printing of the New Testament started with preliminary copies in 1777 and the final copies printed in 1781. The addition of the Old Testament followed in 1782. Aitken's printing of the King James Version came to be called the "Bible of the Revolution" because it was small enough to fit into the coat pocket of the soldiers of the Continental Army. This Bible was the only one ever authorized by the United States Congress, part of whose resolution said: "they recommend this edition of the Bible to the inhabitants of the United States, and hereby authorize him [Mr. Aitken] to publish this recommendation in the manner he shall think proper."

The Centennial Library page from an Aitken Bible is from a copy printed in Philadelphia in 1782, Robert Aitken's first and only edition of the first English Bible printed in America. The page measures about 6 inches by 4 inches, making the Bible small enough to fit into the pocket of a Continental Army soldier. The text from the King James Version on these two pages is from I Corinthians 7:1 to 8:7.