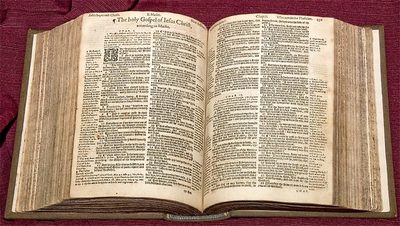 The copy of the Geneva Bible, first published in 1560, is a small quarto edition printed by Christopher Barker in London in 1595 during the reign of Elizabeth I. This Roman letter edition, with a later 19th century binding, also has bound within it a 1594 Psalter, the hymn book of the time. This Geneva Bible is very typical of the copies brought to the New World by the Pilgrims in the early 17th century.

This work is licensed under a Creative Commons Attribution-Noncommercial-No Derivative Works 4.0 License.