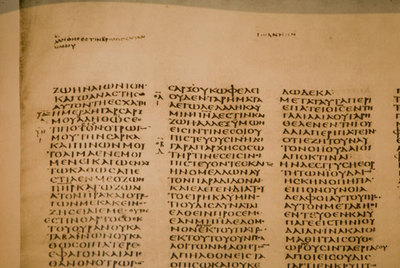 The Codex Sinaiticus is an important Bible manuscript named after the monastery of St. Catherine on Mount Sinai, where the manuscript was discovered in the 19th century. It is on vast almost square pages of parchment, about 15 by 13 inches. Some 390 leaves (pages) survive out of an original estimated total of 730. It is written in Greek, with four columns on every page. The manuscript comprises the Old and New Testaments as well as two apocryphal texts. The manuscript was probably copied in the 4th century A.D. in Alexandria, Egypt, though some have argued for origins in Caesarea on the coast of Palestine. The manuscript is now bound principally in two volumes, not including some further fragments in Leipzig, St. Petersburg, and at Mount Sinai still. The Codex Sinaiticus is one of three great Bible manuscripts, the others being the Codex Vaticanus and Codex Alexandrinus, all three providing incalculable value for the history of the Biblical text.

This copy of the Codex Sinaiticus (4th century Greek manuscripts of the Old and New Testaments ) is a photographic reproduction of the original manuscripts housed in the Imperial Library at St. Petersburg, Russia. The facsimile was made from negatives taken in 1908. This edition, in two large volumes, was published by Oxford University in London in 1911.