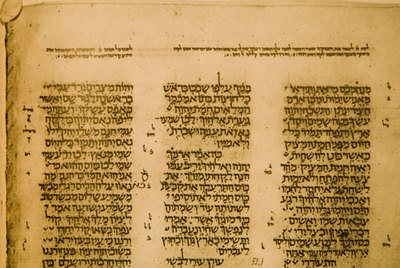 The Leningrad Codex is the world's oldest complete manuscript of the Hebrew Bible that has been preserved to the present time. It is housed in the Russian National Library in St. Petersburg ( formerly Leningrad), and thus it has become known simply as the Leningrad Codex. The manuscript also at times goes by the name of the Cairo Codex, because Cairo, Egypt is the original place of the copying of the text in the early 11th century. The manuscript first came to scholarly attention in 1845, and was subsequently acquired in 1863 for what was then the Imperial Public Library in St. Petersburg. Some have suggested that this Codex is the single most important manuscript of the Bible, for it established the text of the most critical editions of the Hebrew Bible.

This copy of the Leningrad Codex (11th century manuscript of the Hebrew Bible) is a photographic reproduction of the original manuscript housed in the Russian National Library in St. Petersburg. This facsimile of the Codex, an edition published by William B. Eerdmans in 1998, was made from photographs taken in 1990.