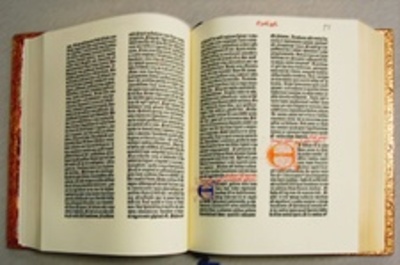 Johann Gutenberg was the first in the West to advance the use of moveable type for printing. His greatest printing achievement, and the first book ever to be printed by moveable type in the West, was the magnificent two-volume copy of Jerome's Latin Vulgate, commonly called today the Gutenberg Bible. Completed in 1455, the project resulted in the printing of about 200 copies on paper and an additional 30 deluxe copies on vellum. The expense of the project, as well as the actions of unscrupulous business associates, forced Gutenberg into debt from which he never recovered. The Bibles did sell well enough for a second edition to be printed two years later. Today, there are only 46 copies of the Gutenberg Bible still in existence, about half of which are complete. These are the property of libraries and private collections scattered throughout the world. Without Gutenberg's invention, allowing for the eventual printing of common language copies of the Bible in the 16th century, it is possible that the Protestant Reformation may not have happened or have been significantly delayed.

This copy of the Gutenberg Bible is a reproduction of the Mazarin Bible, once owned by Cardinal Jules Mazarin (1602-1661), who under Louis XIV directed French foreign and domestic affairs. It is currently housed in the Mazarin Library at the French Institute in Paris. This two-volume, folio-size limited edition facsimile of the Mazarin Bible was printed in Paris in 1985, using full color printing on a high quality handmade paper, finely bound in red morocco with gilt edges. It dramatically replicates the appearance and feel of the original Gutenberg Bible.