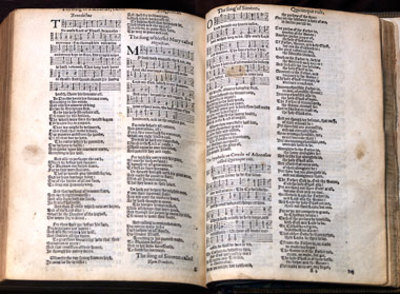 Thomas Sternhold, Groom of the Robes to Henry VIII and Edward VI, was the principal author of the first English metrical versions of portions of the Psalms (1547). Later augmented with settings by John Hopkins, they were often bound into various editions of the Bible. Very popular and widely circulated, as a separate volume they were re printed more than 400 times between 1550 and 1640, and continued in regular use in some congregations until the late 18th century. The Cedarville University copy is bound with the Centennial Library's 1613 edition of the King James Bible.