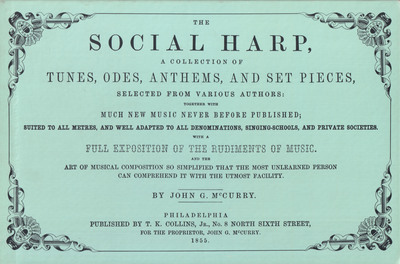 John Gordon McCurry’s The Social Harp is one of the rarest of southern shape-note songbooks. First published in 1855, it was reprinted without changes in 1859 and 1868, but fewer than ten surviving copies of these three printing have been identified. The Cedarville University copy is a facsimile of the first edition. McCurry (1821-1886) lived his entire life in Hart County, Georgia, and some of the tunes in The Social Harp, designed to be used in singing schools, were written by his local acquaintances. About half of the tunes had appeared in earlier publications, such as The Sacred Harp.