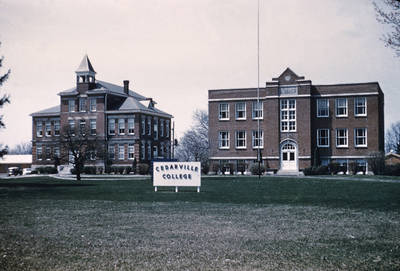 Cedarville College was originally conceived and founded by the Reformed Presbyterian Church. Chartered in 1887, the college opened September 1894, with 36 students enrolled. Classes were held in the former house of Rev. Hugh McMillan who had operated an academy there in the middle of the 19th century. On the left is "Old Main," erected in 1895. On the right is the Science Hall built in 1922. In 1928 the General Synod turned the school over to Trustees of the College. Due to financial difficulties, the school was turned over to the Baptist Bible Institute of Cleveland in 1953. Cedarville's first present was Rev. David McKinney, who served 21 years.