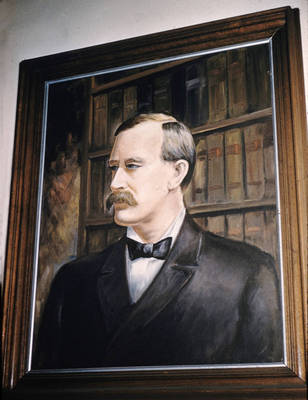 This painting of James Henderson Kyle by Jurkat hangs in the college library. Having substituted for the main speaker at an Independent political party rally, Kyle was subsequently elected to the state senate. In those days U.S. Senators were elected by the state legislatures instead of by popular ballot. In 1891, Kyle became one of the few U.S. Senators of the Populist Party. He headed the Committee on Education and Labor. Since 1882, organized labor had been campaigning for a national labor day. On August 28, 1893, Kyle introduced his bill which was read and referred to his committee. In the second session of this 53rd Congress, the Senate began debate upon this bill. By this time twenty-five states recognized a Labor day. The original bill called for the first Monday in September to be known as "Labor's Holiday". Someone tried to amend this bill, substituing the first of September, thus causing it to occasionally fall on Sunday. Senator Sherman (Ohio) backed Kyle by saying, "I do not myself like to encourage holidays on Sunday. There is too much old Presbyterianism in me for that." The amendment was withdrawn and the bill passed as read. After having been tabled for a few days in the House, it was signed by the Speaker on June 6, 1894. President Grover Cleveland signed the bill into law June 28, 1894.