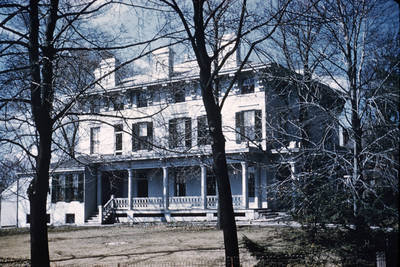 This is the home of poet Colonel Coates Kinney. This poet, soldier, journalist, statesman and orator was born in New York in 1826. He moved to Ohio in 1840 which was his home until his death in 1904. He attended Antioch College during the presidency of Horace Mann. He also studied law under Thomas Corwin, who, as we have noted before, became governor of the state. In 1849 "Rain on the Roof" appeared and making an immediate appeal brought the young poet into prominence. Colonel Kinney served in the Ohio Senate from 1882-1883 as a Republican. In 1888 at the state celebration of the Centennial Year, Kinney delivered his now famous "Ohio Centennial Ode." Colonel Kinney issued three volumes of poems for the public, while his daughter, in 1927, released a volume for private circulation.