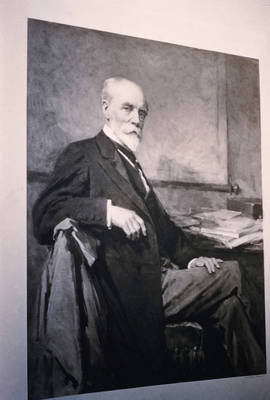 This is Whitelaw Reid, "the scholar in politics." Author, journalist, and diplomat, he was Greene County's most distinguished citizen. He graduated from Miami University and was the recipient of honorary degrees from other universities at home and abroad. He was editor of the New York Tribune and ambassador to Great Britain. He was also republican vice presidential candidate in 1892. He was born at the Reid homestead in Cedarville township (at that time Xenia township), October 27, 1837. He died in London, England, December 15, 1912, while in the service of his country.