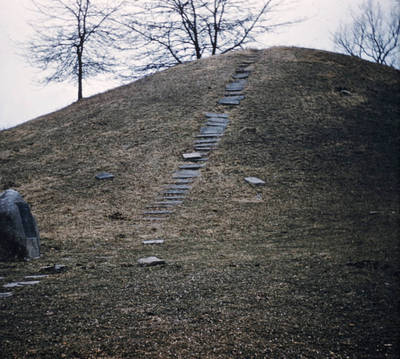 Here is what is commonly called the Williamson Mound, the only large mound in the county, although at one time there were between 70 - 80 mounds in Greene County. The memorial stone reads in part: "In grateful remembrance this public state park has been created through the generosity of public spirited citizens of Greene County, who donated the land. The prehistoric Indian Mound, known as the Williamson Mound, thus will be preserved for ever, and stand not only as a memorial and monument to the donors, but to those first Ohioans who sleep within." It has been said when this mound was excavated the Indian skeleton was removed to the State Museum at Columbus. It seems the interred Indian was of some importance for the mound is built, in part, of various kinds of soils not found in this locale. Thus it appears this spot was a mecca for pilgrimages for the pre-historic Indians.