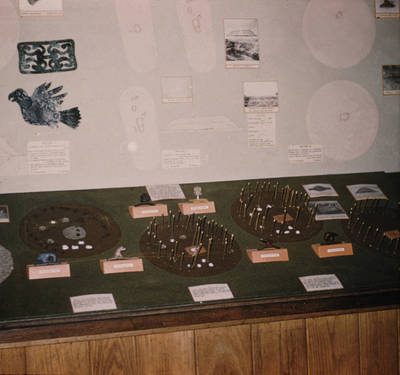 This exhibit is found in the Mound City Group National Monument near Chillicothe. In preparation for the mound building, the land was cleared by burning and then possibly covered with hard clay. A few inches of sand or gravel were also spread out to serve as a floor. Posts were then sunk in a circle and twigs of branches woven in among them along with a thatched roof. These were then daubed with mud and clay. Inside were low table-like affairs upon which the dead were placed. Sometimes the less important members were cremated in elevated basins and the remains moved to a burying table. After placing their dead on these, they built cabin-like structures of logs over them and covered these in turn by small mounds of earth. Eventually, when filled with these small mounds, the structure was covered over with earth.