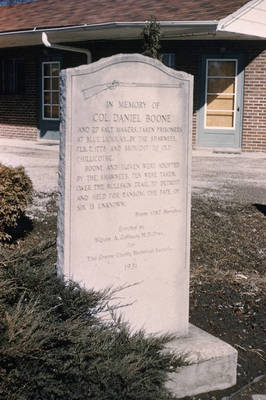 In memory of Colonel Daniel Boone and 27 salt makers taken prisoners at Blue Lick, Kentucky, by the Shawnees, February 7, 1778, and brought to Old Chillicothe. Ten were taken over the Bullskin Trail to Detroit and held for ransom. Detroit Street in Xenia was part of this Bullskin Trail which went from Cincinnati to Detroit. After being adopted into the tribe as the son of Black Fish, Boone and a man named Darnell planned to excape at night. Boone got away easily and headed back to Boonesborough. Darnell, however, lost his way and was chased by Indians in the morning.