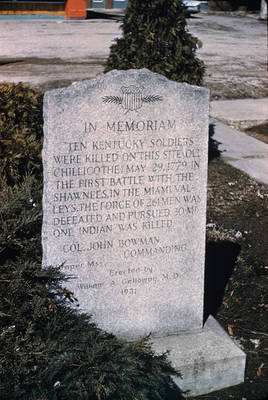 In memoriam: ten Kentucky soldiers were killed on this site, Old Chillicothe, May 29, 1779, in the first battle with the Shawnees in the Miami valleys. The force of 261 men was defeated and pursued 30 miles. One Indian was killed. Oldtown, the chief town of the nomadic Shawnees, was the place of rendezvous for war parties from Piqua, Maumee, Sandusky, Mad River and other towns to carry murder and desolation to settlers. Here they returned with their prisoners, plunder, and scalps before separating for their different villages. The dwellings were constructed with poles and roofed with bark. There was a stockade enclosing several acres of ground, including the village and Council House.