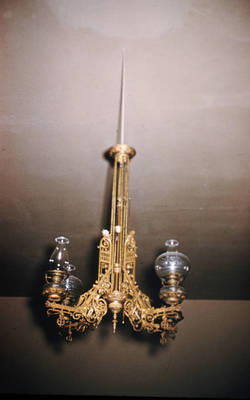 The Primitive Baptists, Predestinarian Baptist, or hard-shell Baptist, as they have been called, are a very strict and religious group of people as were their kin, the Scotch Coventanters. The name "Primitive" alludes to the fact that these people wanted nothing to do with modern, man-made contrivances. Thus you see in this picture the kerosene burning chandelier as still used today. Along with the use of no electricity, the building is heated with two pot-belly stoves. This group is against both Sunday Schools and missions, and requires that their members be baptized in running water; hence no baptistry in the church.