In Memory of Rev. Robert Armstrong 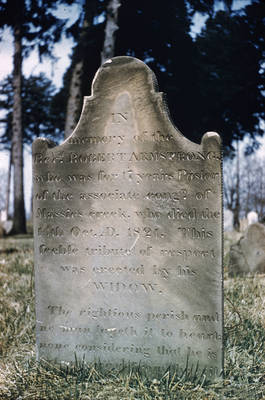 In memory of the Rev. Robert Armstrong, who was for seventeen years pastor of the Associate congregation of Massie's Creek and who died October 14, 1821. This feeble tribute of respect was erected by his widow. In 1802, Armstrong performed the first wedding in the county at the corner of the Bullskin Trail (Detroit Street) and the Scioto Trail (Main Street). At this time there was a committee meeting at the intersection in Xenia to decide upon a name for the county seat. Several names were considered. Armstrong approached the group and said, "Gentlemen, allow me to suggest a name for your county town. In view of the kind and hospitable manner in which I have been treated whilst a stranger to most of you, allow me to suggest the name of "Xenia," taken from the Greek, and signifying hospitality." After several ballots, the name of Xenia finally won.