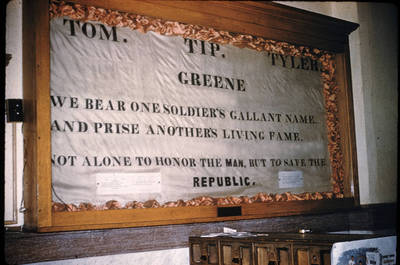 This banner was used in the presidential campaign of 1840 by John Sexton, the leader of the Whig party in Greene County. The three Whig candidates mentioned here are Tom, for Thomas Corwin, candidate for governor and a Greene County lawyer; Tip, for Tippecanoe who was William Henry Harrison; and Tyler, who was John Tyler of Virginia, the vice presidential candidate. All three were elected, and William Henry Harrison was the first president Ohio sent to the White House. This campaign was known as the "Log Cabin" campaign and gave rise to a number of political songs, such as "Tippecanoe and Tyler, Too" and "General Harrison's Log Cabin and Quick Step.