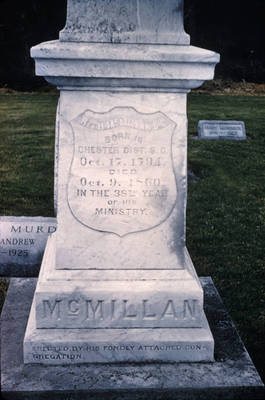 Rev. Hugh McMillan, born in South Carolina in 1794, died 1860 in the 38th year of his ministry. He filled well the measure of his days through divine grace in all the relations of life which he occupied. He died with his armor on in the service of the cross. As his life, so his death, was with the Master whom he loved. After he had served his own generation, by the will of God, he fell on sleep. He was 31 years pastor of the Cedarville Reformed Presbyterian Church. This was the fourth congregation to be organized in Greene County, 1809. The first church building erected by the Covenenters in Greene County was built in 1812 of round logs with the cracks filled with clay. The second church, of stone, was built in 1824; and the third, of brick, in 1839. This momument is on the very place where McMillan's pulpit had stood in the second church.