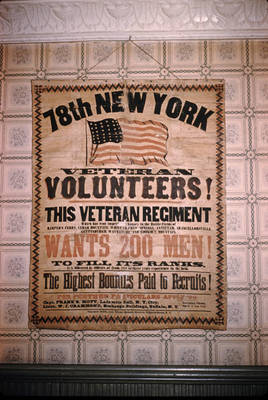 This banner, which hangs in the lobby, was used in recruiting Union soldiers in the Civil War. One way to recruit was to find a drummer boy who would stand on the street corner and drum. After a crowd had gathered, the recruiter would begain his spiel. Such a drummer was Gilbert Van Zandt, born in Port William and later a Xenian. Little Gib, as he was called, was so good that he enlisted and was accepted. Thus he became, at 10, the youngest Union soldier.