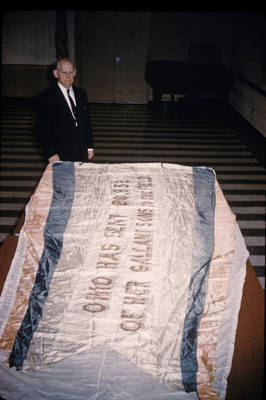 In 1864 this banner came to Ohio for leading the other states in enlistments, proportionately, in the Union forces. Likewise, Greene County led the other counties, and Cedarville township led within the county. It has been said this banner came from Washington and was sent by President Lincoln. However, at this time there is no information of any document having accompanied the banner. It is made of fine silk and has the shape of the official flag of Ohio. On the face, in gilt, it reads, "Ohio has sent 291,952 of her gallant sons to the field." The reverse says, "Ohio, true to the Union." Displaying the banner is Dr. Hammond, President of the Greene County Historical Society.