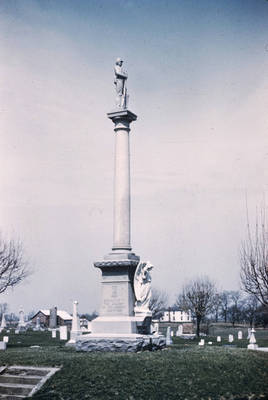 In Cedarville's North Cemetery, this monument was dedicated to the memory of our heroes, 1861-1865, erected by Vinna M. Harper in honor of her husband, George W. Harper, in 1916. In his second inaugural address in 1865, Lincoln had stated, "With malice toward none, with charity for all, with firmness in the right, as God gives us to see the right, let us strive on to finish the work we are in; to bind up the nation's wounds". On April 14 he said, "I hope there will be no persecution, no bloody work after the war is over." This good will was cut short by an untimely death due to the fatal shooting by John Wilkes Booth. Although the North lost a beloved leader, and the country lost a President, the South lost a friend when they needed one the most.